Firefighters and members of the public awarded at GMFRS Recognition Event 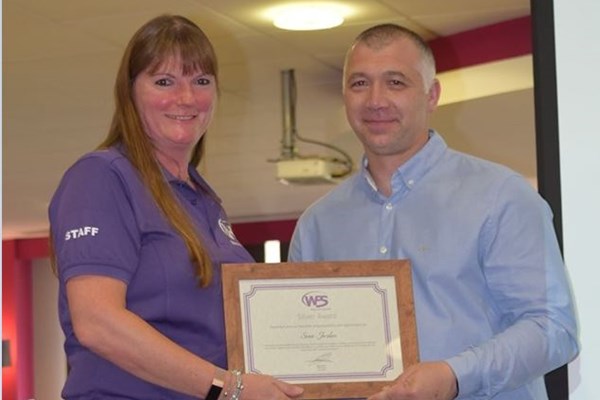 Staff and members of the public have been formally recognised for their bravery and achievements during challenging incidents and scenarios.

On Friday 16 December 2022, we hosted an event to celebrate individuals who were nominated for a Certificate of Outstanding Performance or a Chief Fire Officer’s Commendation award – the highest honour that can be given by the Service.

In total, six certificates were presented to staff and members of the public while, four Chief’s commendations were awarded to Graeme Burton, Katie Butterworth, Alisha Roscoe and Emily Porter at the event. The awards covered incidents that took place between 2020 and 2022 – due to COVID restrictions during this time, the events were put on hold. 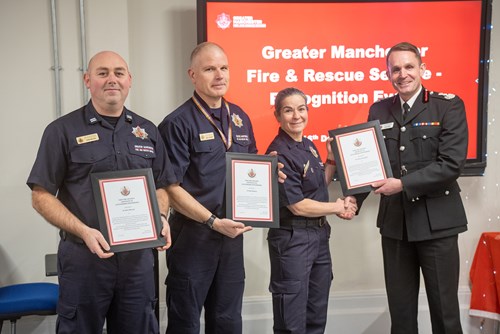 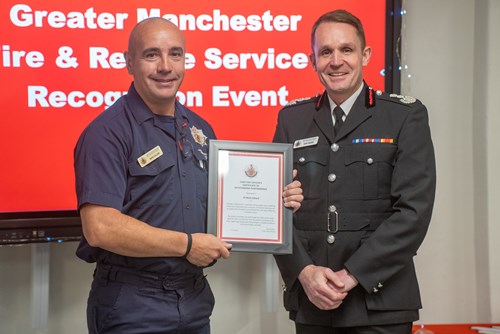 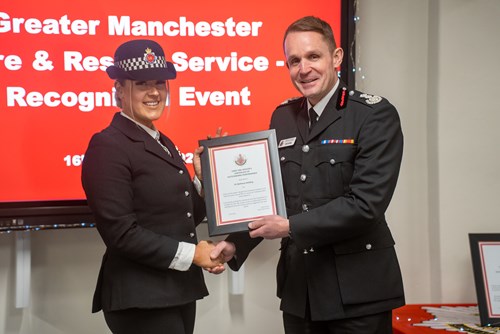 The presentations took place at the Fireground Museum in Rochdale where the award recipients celebrated their achievements together during a small event.

Chief Fire Officer Dave Russel said: “I’m incredibly proud of each of you who are with us today as you’ve demonstrated in your actions, the values that we as a service work towards each and every day.”

Bury Red Watch Firefighters Neil Massey, Chris McCool and Carole Jaszewski were three of those receiving awards for their bravery. It follows an incident in Bury when they were called to an MOT centre close to their station following reports that a man was unconscious.

They acted quickly and gave CPR and a defibrillator to the man before the ambulance arrived. The man’s daughter then updated the station to say her dad was doing well and making a good recovery thanks to their actions and quick response.

Head of Training Delivery, Area Manager Val Hussain, who made the nomination for this incident said: “Within 20 minutes the crews had got to the scene, assessed the situation, set up the first aid equipment, carried out CPR, and delivered three shocks using the AED. It is clear the level and quality of the CPR delivered to the man was high-quality and effective, highlighting how the team worked together very well by rotating roles.” 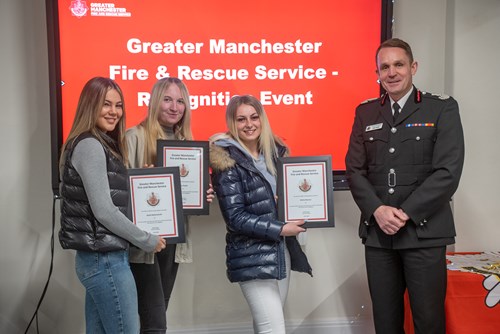 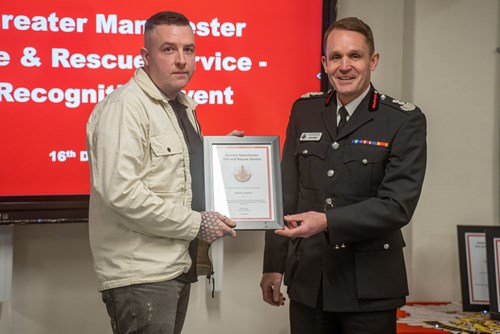 A further award was given to member of the public, Graeme Burton, who demonstrated his selflessness when stepping forward to offer a person at an extremely challenging personal time, a listening ear and a friendly voice – bringing them safely down from a bridge.

The incident commander, Watch Manager Patrick Knowles said: “I have no doubt that if Graeme had not stopped, this incident could have had potentially devastating consequences and it is credit to his character that we facilitated a successful outcome.”

“These types of actions demonstrate the true bravery of not only our emergency services, but members of the public who may not have any training but want to help during someone’s time of need.”