IT is with great sadness that we share the news of Greater Manchester Fire and Rescue Service’s (GMFRS) first ever Search and Rescue dog passing away at the age of 16.

Echo, a yellow Labrador, joined the Service in January 2004 and served until his retirement in 2013.

He passed away peacefully on Wednesday, July 17, 2019, surrounded by his family. 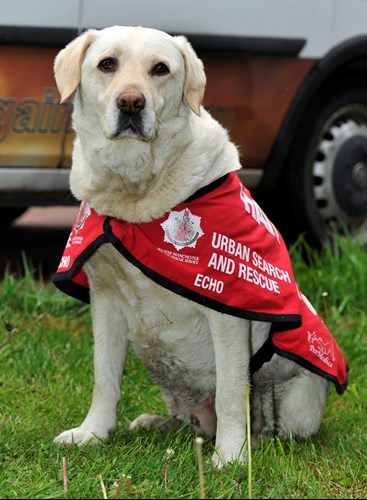 As well as being a working dog, Echo was a much-loved pet, and lived with his owner and handler Crew Manager Mike Dewar and their family.

Fire Investigator and Dog Unit Manager Mike Dewar said: “Echo served on both GMFRS’ Urban Search and Rescue team and also the International Search and Rescue team. He undertook operational deployments nationally and internationally and eventually became one of the most highly decorated dogs in the UK fire service winning prestigious awards such as the PDSA Order of Merit, Pride of Britain, IFAW animal of the year, Hero dog of the year, and also received a UN letter of outstanding performance.

“Echo’s greatest hour was when he was deployed along with the UK ISAR team to the devastating Earthquake in Haiti, a hell on earth that no dog team could possibly prepare for.

“Echo worked tirelessly for 10 days searching collapsed buildings and bringing hope to devastated communities. As a result of his fantastic effort he eventually succumbed to heat exhaustion. The memories of this deployment never really left Echo and the horror he witnessed left him with nightmares for the remainder of his life.

“In his retirement years Echo continued to engage in community activities, meeting young people from around the county and helping us to spread fire safety messages. He also made a number of TV appearances and featured in high profile magazines with his stories of heroic determination in adverse situations.

“Echo paved the way for many of the fire service dogs now serving in the UK, a legacy he would be proud of. He passed away peacefully this morning with his family around him following a spell of illness. He will be greatly missed.”

All at GMFRS, and those who have met Echo over the years, will also miss him greatly and thank him for everything that he has done.

GMFRS Assistant County Fire Officer Tony Hunter said: “It is a sad time for everyone at GMFRS this week, in fact for everyone who knew Echo, as we learn of his passing. Echo was a superb asset to the Service during his time with us right up until he retired in 2013.

“During his working years Echo played a vital role alongside his handler and owner Mike Dewar, carrying out search and rescue duties at some of our most challenging incidents. Most significant was his role in International Search and Rescue team during their work in Haiti in 2010 following a devastating earthquake, where he worked tirelessly for 10 days searching collapsed buildings.

“Echo was our very own super-dog and for his hard work and dedication, alongside Mike and other colleagues, was recognised many times over the years - including at the Pride of Britain.

“Even in his retirement Echo continued to attend community events and putting a smile on people’s faces. We are going to miss him greatly and want to express our thanks for all of his and Mike’s hard work over the years.”