Just three fire engines from Farnworth, Hindley and Wigan stations remain at the scene of a fire in a yard on an industrial estate on Three Sisters Road in Ashton-in-Makerfield, Wigan.

At the height of the incident, approximately 60 firefighters and 12 appliances - including support from Fire and Rescue Service personnel from Cheshire, Lancashire and Merseyside - were engaged in extinguishing a quantity of wooden pallets, cardboard and plastic which was well alight in the open air.

Crews worked hard to contain the blaze to the yard and prevent it spreading to nearby buildings. GMFRS will be at Three Sisters Road for at least the rest of this morning. 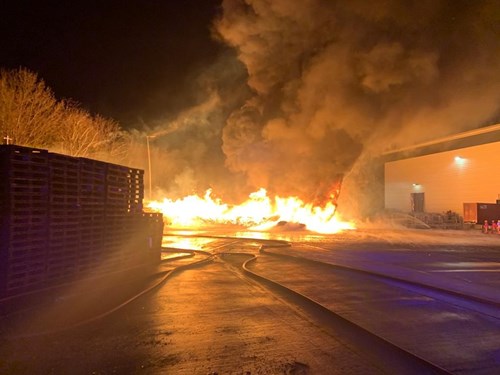 11.30pm update
Roughly 60 Greater Manchester Fire & Rescue Service (GMFRS) firefighters are tackling a blaze in a warehouse yard on an industrial estate on Three Sisters Road in Ashton-in-Makerfield, Wigan.
Crews were called just after 9.30pm on Saturday 24 April to reports of a fire affecting wooden pallets and packed plastic and cardboard stacked outdoors. Firefighters from stations including Agecroft, Atherton, Bolton Central, Bolton North, Cheadle, Hindley, Leigh, Manchester Central and Wigan were quickly on the scene and found a fire well ablaze, measuring roughly 30m by 30m. They are being supported by crews from Cheshire, Lancashire and Merseyside.
Paul Fearnhead, Area Manager for GMFRS, said: "We have 12 appliances currently engaged in fighting the fire on Three Sisters Road in Ashton-in-Makerfield. I want to praise firefighters' commitment and professionalism - they working hard to try to contain the blaze and in doing so significantly reduce the risk of the fire spreading on the site. We are aided by the lack of wind but would ask local people to keep nearby roads clear of traffic, to allow emergency service vehicles easy access.
"It has been a day of fine weather and nearby residents may be in their gardens or have their homes' windows and doors open; I do ask that these are closed and that people remain indoors due to acrid smoke in the area.
"GMFRS expects to be at the scene through the night, but the community should be reassured that we are fighting this fire and we will be here until it is out." 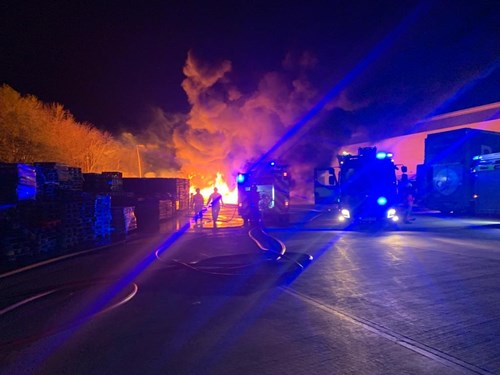