Volunteers have been thanked and multiple partner agencies and other emergency services praised by Greater Manchester Fire and Rescue Service (GMFRS), following a surge of incidents caused by the weekend’s stormy weather.

Over an exceptionally busy weekend, GMFRS attended almost 150 incidents across all 10 boroughs of the city-region, including large fires, road traffic collisions and floods as the UK was hit by Storm Eunice and Storm Franklin.

Firefighters were on standby after severe flood warnings were issued for the Didsbury area. Specialist resources were deployed across Greater Manchester as firefighters responded to a variety of incidents including fallen trees, damaged buildings and flooding. 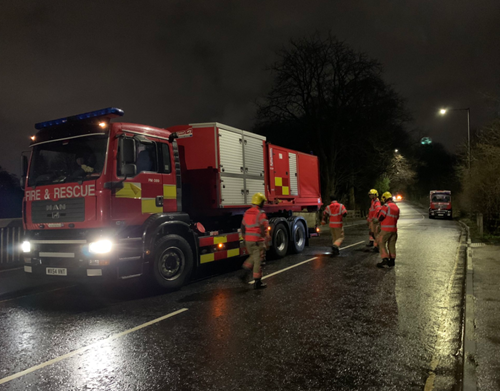 Fire crews were supported by a number of regional volunteer organisations including the Salvation Army, Red Cross and Mountain Rescue teams. Didsbury Mosque also offered shelter to a number of evacuated residents.

GMFRS Deputy Chief Fire Officer, Ben Norman, said: “It's been a challenging few days for us, but our staff have stepped forward and dealt with that brilliantly - particularly those that returned from rest days yesterday to come in to help support what we thought was going to be a vast effort required to save the West Didsbury areas and protect communities as best as we could.

“We had a huge amount of equipment and personnel standing by at Whitehill Fire Station, where GMFRS was joined by other emergency services.

“We'd also like to pay a huge thank you to those from the voluntary sector that were always standing with us; people from the Salvation Army, the Red Cross, Mountain Rescue, and also the mosque, which was the rest centre should people be required to leave their home. Residents were well looked after by caring individuals, and I applaud them for volunteering and spending the time looking after people in their hour of need.”

Some of the incidents attended by firefighters across the weekend include a commercial premises on Stockport Road, in Cheadle Heath, where signs had become detached from their fixings. On Friday firefighters were also called to a partially collapsed building on Douglas Street in Atherton.

On Sunday, firefighters helped people whose vehicles had become trapped in flood waters on Stanley Road in Stockport, while on Monday firefighters continued to respond to incidents involving dangerous structures as winds speeds remained high.

The Environment Agency has now removed severe flood warnings covering the River Mersey in Didsbury and Northenden. However, a flood alert for the area currently remains in place and residents are being urged to take care when travelling, and to only travel when necessary.