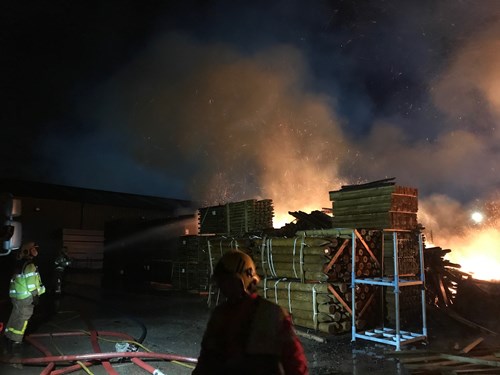 Firefighting at a timber yard near Wigan continues with eight fire engines now in attendance.Crews from Stretford and Agecroft make roughly 40 firefighters at the scene in Bryn, joining others from GMFRS and Lancashire Fire & Rescue Service.

Group Manager Lee Coleman, Incident Commander, said: "The fire itself is contained but still remains 50m by 50m with smoke continuing to spread into the immediate area. I'd ask people living, commuting or working nearby to remain mindful of the dangers of inhaling smoke - please keep windows and doors closed as a precaution.

"Colleagues from Greater Manchester Police are on scene and are arranging a contraflow system on the local road network in an effort to keep Monday morning traffic moving.

"I want to praise firefighters for their continued hard work this morning. The fire is not likely to spread and I am confident it will soon be extinguished."

Highways England have closed the northbound slip road at Junction 25 of the M6 motorway.

At 1.26am Greater Manchester Fire & Rescue Service (GMFRS) were called to reports of a fire at a timber yard near Bryn, Wigan.

Two fire engines from Wigan were joined at the scene just off the A49 Wigan Road by appliances from Leigh and Hindley, plus additional neighbouring fire service support from Warrington and Skelmersdale fire stations.

Upon arrival crews quickly established that a fire measuring roughly 50m by 50m was affecting an outdoor pile of timber on Park Lane Industrial Estate. Four jets are currently being used to fight the fire with the support of an aerial appliance.

A road closure was swiftly put in place by the Fire Service affecting 650m of the A49 from the major roundabout with Warrington Road and Land Gate Lane. The roundabout is a key artery for the nearby M6 motorway, and at present remains accessible from the motorway and southbound from Wigan town centre.

There is smoke in the area - local residents and businesses are encouraged to keep windows and doors closed until otherwise informed. However, the smoke is not at present drifting the the direction of nearby Junction 25 of the M6. 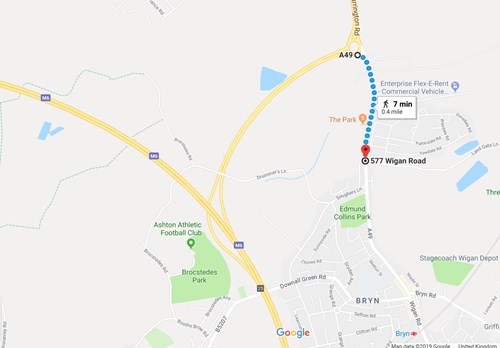