Three fire engines are maintaining an active presence at a landfill site on Pilsworth Road, Bury, after firefighting operations were scaled back further overnight.

Crews are being supported by a helicopter arranged by site owners Viridor, which is dropping water onto the affected areas, and by heavy machinery operators turning over waste materials to enable firefighters to damp down any remaining hotspots.

GMFRS crews will remain at the scene into Thursday (29 April).

This update record has now ended.

The Major Incident declared by Greater Manchester Fire and Rescue Service (GMFRS) at a landfill site in Pilsworth Road, Bury, has now been stood down.

Four fire engines remain at the scene this morning (Tuesday 27 April), after crews worked hard throughout the night to suppress the remaining hotspots at the scene.

GM Val Hussain, in charge at the scene, said: “I’m pleased to say that our firefighters’ hard work throughout the night has allowed us to contain this fire and scale back the Major Incident declared yesterday.

“This fire came at the end of a challenging weekend that saw our crews tackle a number of significant incidents across the city-region and assist colleagues in West Yorkshire with a large moorland fire.

“I cannot fault the professionalism of our firefighters, who have responded to all of these incidents quickly and effectively. As a result of that work we have been able to decrease our presence at the site and continue to work hard to bring this to a resolution as soon as possible.

“I also want to thank local residents for their understanding and cooperation over the course of the last 24 hours. We expect road closures around Pilsworth Road to be reduced by noon, but crews will remain in attendance at the site throughout the day to damp down any remaining pockets of fire.”

Viridor, which owns the site, has made arrangements for a helicopter to be deployed to drop water on the fire this morning. GMFRS firefighters are providing tactical support to this operation.

GMFRS crews have been supported at the scene by colleagues from Lancashire Fire and Rescue Service, who provided a specialist appliance to assist with the operation, and The Salvation Army.

Advice for local residents to keep windows and doors closed has now been lifted. The large smoke plume caused by the fire has been contained to the site, although it may continue to smoulder for some time.

Four fire engines remain in attendance at a landfill site on Pilsworth Road, Bury, at the end of a day that saw up to 10 crews tackling a fire involving a large, steep quantity of household waste.

The fire, declared a Major Incident at 5.40am this morning, generated a significant smoke plume through the day. While this has now partially subsided, residents in the area should continue to keep their windows and doors closed while crews carry out their work.

Heavy machinery is currently in use at the site to excavate some of the waste materials and allow firefighters to apply water to the remaining hotspots. Crews will remain at the scene throughout the night to suppress these hotspots and prevent further spread.

Road closures remain in operation on Pilsworth Road, and people are advised to avoid the area at this time. 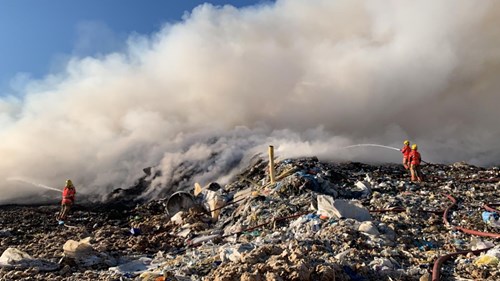 Greater Manchester Fire and Rescue Service (GMFRS) remains at the scene of a Major Incident at a landfill site on Pilsworth Road in Bury.

Eight crews – roughly 40 firefighters from Whitefield, Hollins, Ashton, Agecroft, Moss Side, Altrincham, Marple and Cheadle stations – are working hard to extinguish a fire involving a large steep heap of household waste. They are using hoses, breathing apparatus and heavy machinery, breaking the heap into smaller sections to assist with firefighting.

The high plume of smoke remains, though the lack of wind and high pressure means it is being pulled high into the atmosphere and clear of local properties and the M66 motorway. Consequently, residents as far afield as South Ribble are reporting smelling the fire, though any health risk posed by the smoke remains low. Local people are asked to keep their homes’ and businesses' windows and doors closed as a precaution.

GMFRS will remain at the scene for at least the next few days.

Dave Russel, Chief Fire Officer at GMFRS, said: “It has been an incredibly busy weekend for the service. We have had a number of significant incidents - one in Ashton-in-Makerfield, a number of moorland fires where we’ve been assisting colleagues from West Yorkshire and also this morning the declaration of a Major Incident at a landfill site in Bury.

“I just want to say how proud I am of the firefighters and officers in the service who have worked incredibly hard over the course of the weekend. It certainly looks like we’ve got a busy period ahead of us, particularly given the weather. The incident at Bury will be protracted and it is likely we will be there for several days.

“In terms of incidents over the weekend, I just want to thank members of the public, particularly to the residents of Bury for their support and co-operation, particularly in the early hours of this morning and into this afternoon.” 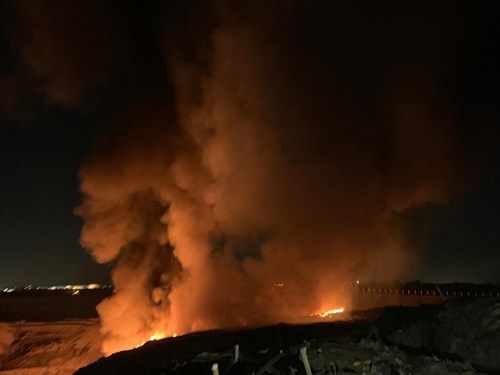 A Major Incident has been declared by Greater Manchester Fire and Rescue Service (GMFRS) concerning a fire at a landfill site on Pilsworth Road in Bury.

A large plume of smoke can be seen in the surrounding area after a section of household waste measuring 150m x 100m started burning at roughly 00.15am this morning, Monday 26 April.

The significant amount of smoke, along with the location of the incident which is adjacent to Junction 3 of the M66, prompted GMFRS to declare the Major Incident at 5.40am.

Crews from 10 fire stations are currently engaged in tackling the blaze affecting a steep heap of shredded waste. Firefighters from Manchester Central, Blackley, Hollins, Chadderton, Bury, Whitefield, Ramsbottom, Heywood, Broughton and Agecroft are using heavy machinery, hoses and breathing apparatus to direct water onto the burning material – the heavy machinery is in turn being deployed to break up the heap and aid firefighting.

Paul Duggan, Area Manager and Head of Prevention and GMFRS, said: “Firefighters have been tackling this blaze at a landfill near Bury for around seven hours and are making steady progress. Conditions are not easy – the surface, around the size of a football pitch, is uneven under foot and there is a significant amount of smoke at the site. I want to take this opportunity to praise GMFRS’ crews for their hard work and dedication.

“The smoke plume can be seen for miles around and the easterly wind means it is drifting across the motorway and in the direction of Ainsworth. I’d ask anybody driving on the motorway to take care around Junction 3 of the M66, and residents in south Bury, to keep their homes’ windows and doors closed.

“I want to reassure the public that the materials on fire and the smoke do not pose a significant risk to people’s health. We have called this Major Incident simply to co-ordinate emergency services’ response and best share our resources. GMFRS will be on site working hard until this fire is out.”

GMFRS will remain at the scene of this fire throughout the day.