On Thursday, November 8, 2018 after leaving Hindley Fire Station on his way to work, Dave proceeded down Bridgewater Street where two members of the public flagged him down.

He pulled over and ran towards a man who was slumped on the doorstep of a nearby property. He made an initial assessment of the casualty, and could see that his lips were blue, and that he had vomited.

Dave put him into the recovery position and checked for chest movements, soon realising that the man wasn’t breathing. He quickly placed the man onto his back, ensured his airway was clear and then began chest compressions.

Dave continued to do chest compressions for around fifteen minutes until the ambulance crew arrived and took over. At this point there was already two ambulances, one rapid response car and the air ambulance in attendance.

When Dave arrived at work later that morning, he informed his line manager of what had happened and suggested that we offer Survival Academy training courses to the taxi company who were involved in the incident, and for those in the local community. 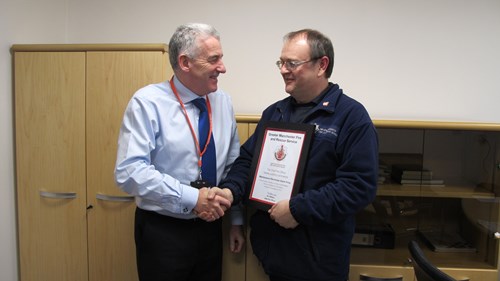 Commenting on the credible work carried out by Dave at the incident, CFO Jim Wallace said: “Dave’s actions at the incident resemble the wealth of experience, quick-thinking, care and compassion that colleagues within the service withhold.

“This incident is also a timely reminder to highlight the importance of learning the vital, life-saving skill, CPR. I am very thankful and proud of Dave’s response in assisting to save a man’s life on that morning, you are a credit to yourself and represent exactly what the fire service is all about.”