The group from Ashton traveled to the island of Cape Verde, off the West Coast of Africa as part of Operation Florian, a humanitarian charity which promotes the protection of life amongst communities in need through the provision of equipment and training to improve firefighting and rescue capabilities.

As well as travelling to Cape Verde themselves, the firefighters shipped vital equipment, including breathing apparatus, to the island ahead of their visit.

They spent the trip training São Nicolau fire service, which currently consists of around 30 volunteer firefighters who have access to basic equipment.

The group are now looking to raise more funds so they access and transfer a fire appliance to Cape Verde.

Firefighter Jo Musgrave said: “Previous projects delivered in Cape Verde had highlighted that firefighters lacked access to even basic equipment and personal protective equipment. We were successful in sourcing breathing apparatus sets, positive pressure ventilation fans and personal protective equipment – which was shipped out to Cape Verde ahead of our visit.

“We also managed to collect medical equipment, such as bandages and basic first aid kits, which were donated to the local hospital. In addition, a number of donations of clothing and school supplies were made for the Red Cross to distribute to families on the island.”

On May 5, 2019, the container began its journey by sea to São Nicolao, arriving around a month later.

They also learned and practised techniques in dealing with road traffic collisions, which included a mixture of classroom based and practical demonstrations.

The training was brought to a close with a final demonstration – which saw the São Nicolau firefighters deal with a road traffic collision involving casualties, putting into practise what the GMFRS firefighters taught them. 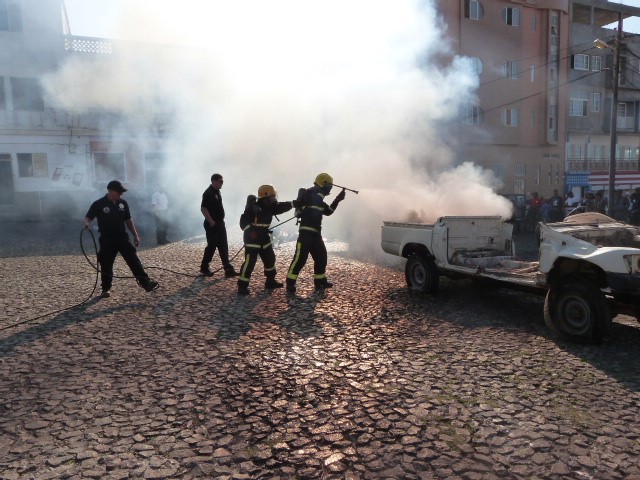 GMFRS Assistant Chief Fire Officer Dave Keelan said: “The aim of the project in São Nicolau was to develop firefighting capacity for the overall benefit of the island’s resident population and tourists.

“I am confident that the efforts of the group who went to Cape Verde have already made a huge difference – everyone involved in the piece of work should be proud of what has been achieved.

“Thanks to Operation Florian and the work carried out leading up to and during the Cape Verde visit now means the majority of the volunteer firefighters who make up the fire service in São Nicolao have potentially life-saving equipment and skills to use in their day-to-day lives and help keep local people and visitors safe.”

The visit was funded thanks to activities held by the group of GMFRS firefighters – including a car wash at Ashton Community Fire Station.

They will now be hosting more charity events during 2020 to allow them to access the fire appliance and have set up a JustGiving page (link opens in a new tab) to support the Sao Nicolau project.

Find out more about Operation Florian (link opens in a new tab) on their website.