Firefighters have the fire under control and will remain in attendance to fully extinguish it.

There are still a number of road closures in place and we continue to advise the public to avoid the area.

Area Manager Ben Levy said: "Our firefighters have worked tirelessly through the night to bring this fire under control and minimise the impact on the local area.

"In addition to firefighters at the scene, our North West Fire Control operators received almost 70 999 calls from concerned members of the public about what was a significant fire.

"As residents wake up there will be residual smoke in the area. People are advised to take care.

"The fire is now under control but firefighters will remain at the scene until it is fully extinguished.

"I'd like to thank everyone involved in responding to this incident, both from GMFRS and partners, for their efforts this morning."

At around 2.15am this morning (Saturday 7 May), fire crews were called to reports of a building fire on Barry Street, Oldham.

Ten fire engines from across Greater Manchester, as well as three aerial appliances and additional support vehicles, are currently in attendance.

The incident involves a commercial building which was well alight when firefighters arrived at the scene. Firefighters are using hose reels and jets to extinguish the fire.

Incident Commander, Group Manager Ian Redfern, said: "In the early hours of the morning we were called to reports of a fire at a commercial building in Oldham.

"Fire crews arrived swiftly at the scene are working hard to prevent the fire spreading to neighbouring buildings. We expect to be dealing with the incident for some time.

"Road closures are currently in place. People are advised to avoid the area and residents should keep doors and windows shut." 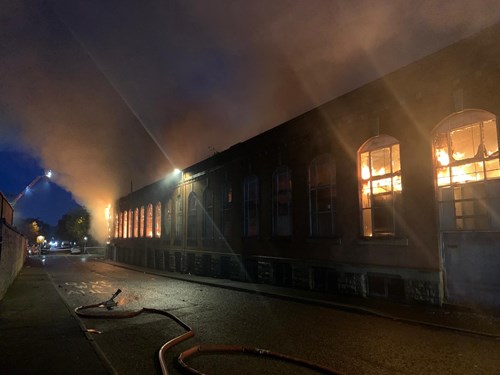 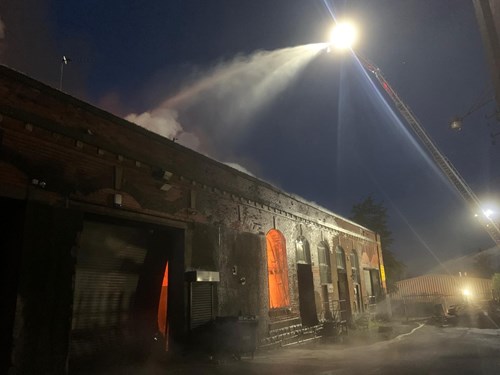