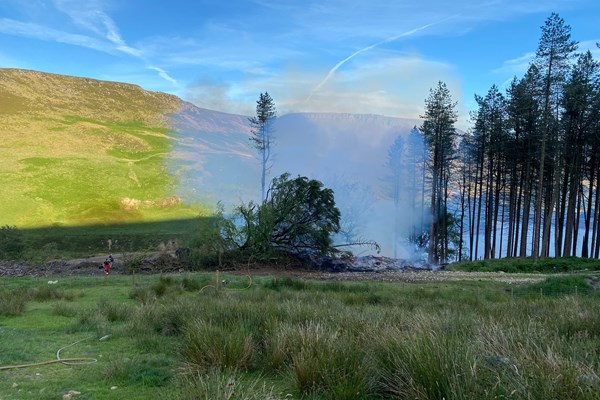 FIREFIGHTERS are currently dealing with a fire involving a commercial building in Midland Street, Manchester.

A call was made to North West Fire Control at 4.27am on Monday, September 16, 2019, to report the fire, with fire engines being mobilised to the address.

Around 50 firefighters and officers from Greater Manchester Fire and Rescue Service are currently in attendance, with firefighters tackling the fire using hose reels.

Firefighters have contained the fire to the part of the building where it started and prevented it from spreading to the rest of the vehicle repair shop.

Midland Street is closed and being looked after by Greater Manchester Police.

The fire involving a vehicle repair shop in Midland Street is now out, with firefighters and officers ventilating and searching the property.

Group Manager Phil Nelson said: “On arrival at the property firefighters were greeted with a well-developed fire with officers and crew members quickly putting a plan in place to deal with the incident.

“The firefighters and officer in charge of the incident have all done a fantastic job bringing the fire under control and preventing it from it spreading to the rest of the workshop and other nearby buildings.

“We are working with local businesses to allow them to resume business as soon as possible.”

Three fire engines remain at the incident and a fire investigation officer will attend to look into what started the blaze.

Midland Street has now been re-opened.

The incident in Midland Street has now come to a close.

Investigations carried out by GMFRS show that the fire started accidentally, most likely in a spray booth within the property.