A mum has thanked the fire crews who rescued her children from a devastating house fire two years ago.

Natasha Wilde, her son Max Ohamara and daughter Madeleine Ohamara, visited Broughton Fire Station this week and were reunited with the firefighters who helped save their lives.

The children, who were aged eight and three at the time, were at their grandmother’s house on Leicester Road in Higher Broughton on 27 October 2019 when a chest freezer in the dining room caused a fire due to an electrical fault.

The fire quickly spread while Madeleine and Max were playing with their cousin upstairs. Their grandmother was unable to reach them and so shouted at them to leave the house, but when they opened the bedroom door the smoke hindered their ability to get downstairs. Fire crews from Broughton, Manchester Central, Agecroft and Philips Park stations quickly arrived at the scene.

“Grandma was helped out by a neighbour. The fire was extinguished but the house was ruined and couldn’t be lived in for 14 months.” 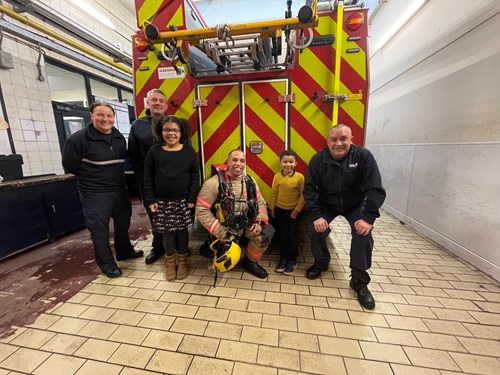 Natasha brought Madeleine and Max to Broughton Fire Station this week to meet the firefighters who helped rescue them.

She said: “All three children spent the night in hospital due to smoke inhalation – they still talk about it now, it was traumatising for them. The visit to see the fire station helped them process what happened and learn about the work of GMFRS.

“I have stayed in touch with the crews at Broughton ever since. I am eternally grateful for those firefighters’ actions – I cannot say thank you enough. All I can say is we have rewarded them with biscuits!

“The children love all things firefighter – and the station have been incredibly accommodating. It feels like the firefighters enjoy seeing the children as much as the kids do. Also, there’s the education for them, including fire safety at home.

“These things can happen to anyone, and I am careful now – I never leave a pan unattended on a stove or a flame lit.”

Mat Wadeson, Crew Manager at Broughton, said: “It was great to see Natasha and her family when they attended Broughton Fire Station. Fire crews do not always have contact with the people we help following an incident, but to have the family come down means a lot to us.

“To have such a good outcome and then be able to talk to the family helps both sides piece together what happened on the day. The kids were shown the equipment we used on the day and were introduced to the crew that rescued them. We look forward to seeing Natasha and family in the not-too-distant future.”

Following the house fire, smoke alarms were fitted in the property by fire crews. Residents across Greater Manchester can access a new Online Home Fire Safety Check tool at manchesterfire.gov.uk, where you can complete a home fire safety check to help identify fire hazards in your home and get advice on simple changes you can make to reduce the risk of a fire. If you are unable to access the online tool, you can contact us by phone on 0800 555 815.

Find out more and access the Online Home Fire Safety Check at manchesterfire.gov.uk/your-safety/hfsa/ 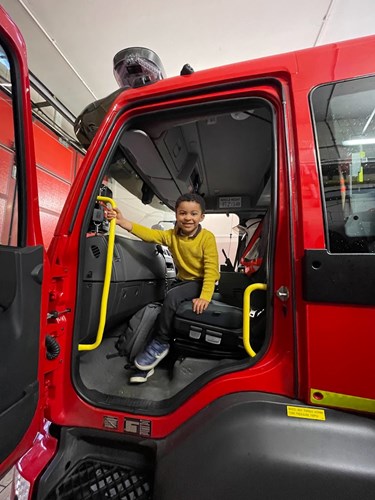 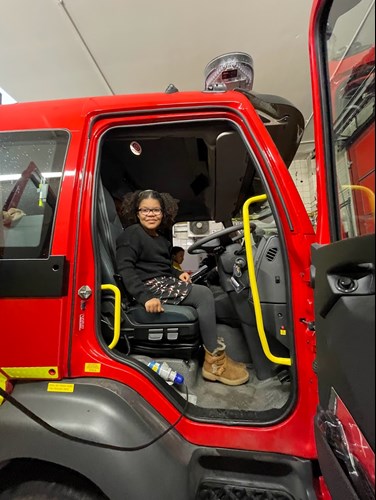